In partnership with Sustrans and Hackney Council, we are pleased to announce that we have been commissioned to design and build the first on-street Parklet for the Borough.

The concept of a ‘Parklet’ is relatively new one over here in the UK. The world’s first ever formal public parklets were initially conceived and installed in San Francisco in 2010. As of February 2013, thirty-eight parklets had been installed throughout San Francisco, and the program is being emulated in cities around the world.
Bespoke to fit the surrounding area, ‘Parklets’ can be customised in a wide variety of styles with many different features including cycle parking, planters, seating and play areas. No two alike in terms of aesthetics; they all have one common aim, creating greener, cleaner, quieter streets and a healthier more active city.

Parklets create little pockets of new public space, providing places to meet, park their bikes and greening the streets. The joint proposal is to install a temporary on-carriageway mixed street seating/ cycle parking parklet outside a parade of local shops at Pitfield Street. It is considered that the proposal will complement the changing emphasis of Pitfield Street in line with the planned progression of Cycle Superhighway 1 proposals which will involve public realm improvements and better conditions for cycling and walking.

Kevin Burke from Hackney Council says “It is hoped that the trial parklet will help stimulate more activity around the local retail parade including a new café which has just opened. Other advantages are that it will provide seating and cycle parking in an area where both are lacking at present.”

We look forward to updating you on the progress in the coming months. To discuss Parklets with our team, contact us today. 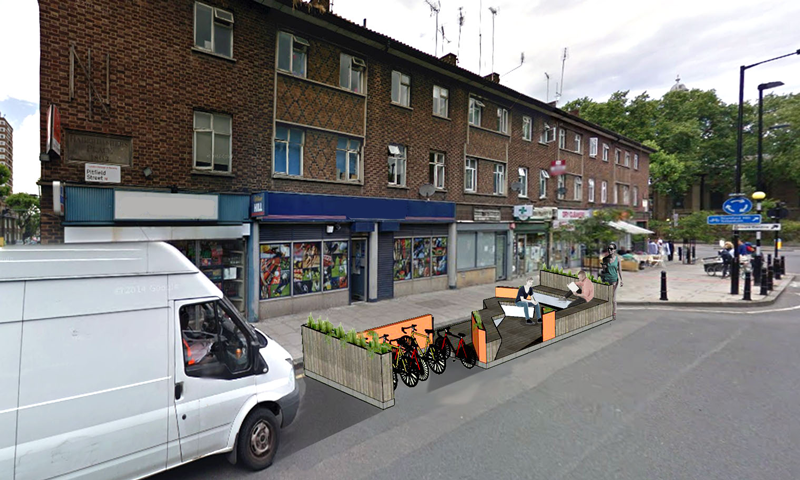