As the recent number of road incidents involving cyclists in the capital prove, even supposedly ‘safe’ cycle lanes can no longer be relied upon as the safety mechanisms that they once were.

Ensuring that cyclists tackle their daily commute without threat of vehicles encroaching on their space, the ‘Armadillo’ is a cycle lane segregator and is a simple and effective way of preventing vehicles from entering cycle lanes. See our examples below of the installation on Royal College Street, Camden.

Made from 100% recycled PVC , the Armadillos are bolted into the ground and spaced out so that cyclists can enter or exit the cycle lanes as needed but emergency vehicles can also drive over them on the way to a fire or similar life threatening situation.

Covered in reflective stripes, they are highly visible to deter vehicles from driving into the cycle lane and are available in a range of sizes depending on the level of protection required.

The soft material is safer for cyclists and helps absorb any impact whilst also preventing damage to the underside of a vehicle when accidentally driven over.

Much quicker and more cost effective to install than other solutions, Armadillos have been successfully installed and used by major towns and cities across Spain and in the USA for the past 7 years.

The recycled plastic has environmental benefits as it reuses old electrical cable sheathing and pipes, helping to reduce CO2 and landfill waste. 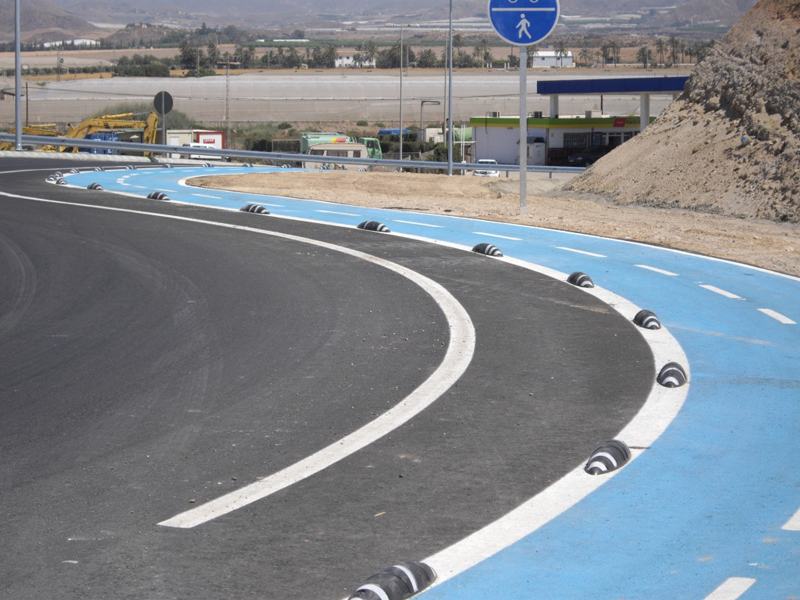 Introduced last year as a trial by Camden Council, the scheme has been a success and will be expanded this year. Phil Jones, Camden councillor recently reported:

“Royal College Street has seen a 40% to 50% increase in cycle traffic since it segregated its cycle route with Armadillos. Also the traffic has slowed down on that street. Now the road is narrower the traffic is slowing. So on those two key measures its gone well.”

Since the documented success in Camden; another 38 local authorities have requested to trial the Armadillos with a view to installing within the next year including Southwark, Hounslow and Ealing Councils.

The London Borough of Camden also picked up the award for best achievement in cycling with their adaptation of the Armadillo scheme.

Cyclehoop are the distributors of the Armadillo in UK, Australia and the Republic of Ireland. Please contact us for more information on the product.