We are proud to announce that New York City has adopted the Cyclehoop concept as a solution to solve their bike parking shortage.

Although we did not win the outdoor category of the competition, New York City have recently decided to emulate the Cyclehoop proposal with their new CityRacks, as their original winning design was too expensive to install.

In the UK, the Cyclehoop has been a popular solution adopted by many cities since its introduction in 2008. In London alone around 5000 cycle parking spaces have been created using Cyclehoops as they are easy and low cost to install, reduce street clutter and decrease bike theft.

New York City has seen a huge boom in cycling with a 26% increase in the number of people travelling by bicycle since 2005. This new investment in cycling infrastructure is vital in supporting this growth in cycling. The city has also installed dedicated cycle lanes across Times Square and will be launching a bike sharing system later this year.

New cycle infrastructure can convey a powerful message. In London our Car Bike Ports and Public Bike Pump are a statement of the City’s support for cycling and sustainable transport.

Photo of Anthony Lau, MD of Cyclehoop  with Commissioner for Transport Janette Sadik-Khan with their winning design for Google’s Indoor Cycle Park (Below) 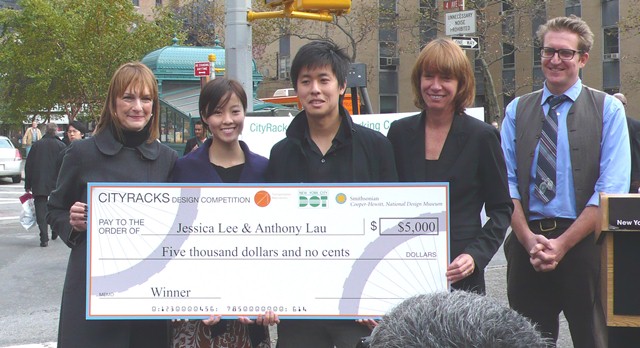