The keen cyclists and designers at Cyclehoop have built the world’s first mobile Disco Bike with a smoke machine! The bike features a disco ball, strobe lighting, 400w smoke machine, and was unveiled last week at the ‘IBikeLondon’ Night Ride.

If you were in Central London on the evening of Saturday 28th you may have seen a blaze of light and music from the 100 cyclists who took part in IBikeLondon’s latest ride. Cyclists of all ages on all types of bikes from road bikes to Boris bikes took part in the Night Ride, which also included three bicycle sound systems to provide music along the way.

The team at Cyclehoop spent a week tinkering in their workshop and built the system with a budget of £150. Mounted onto a Pashley bike, the system is powered by a 12V battery and can be easily ridden around like a normal bicycle. However at the flick of a switch the smoke machine and lights transforms the bicycle into a mobile disco!

You can see the Disco bike in the upcoming IBikeLondon Night Rides. They are 23 miles of fun and relaxed riding starting at City Hall, then zigzagging over 15 bridges between Tower Bridge and Hammersmith Bridge. The ride finishes at the Southbank skate park where the Disco and Music Bikes turn it into a pop-up disco.

Cyclehoop began organising ‘IBikeLondon’ bicycle rides over a year ago and they now attract over one hundred cyclists each month. The rides are free and fun, and welcome cyclists of all ages and abilities. They aim to promote safe cycling and build people’s confidence to ride in the City, and encourage cyclists to share the road with other road users.

Cyclehoop was established in 2008 by keen cyclist, Anthony Lau. The award-winning company designs innovative cycle parking products which include the ‘Bikehangar’ on street secure cycle shelter and the Car Bike Port which converts a car space into ten cycle parking spaces.

How to make the Disco bike: http://www.ibikelondon.com/blog/

Videos of the Disco bike:

The Next IBikeLondon Night Ride is the Halloween Ride on Saturday 2nd November, meeting 7pm at City Hall by Tower Bridge, London. 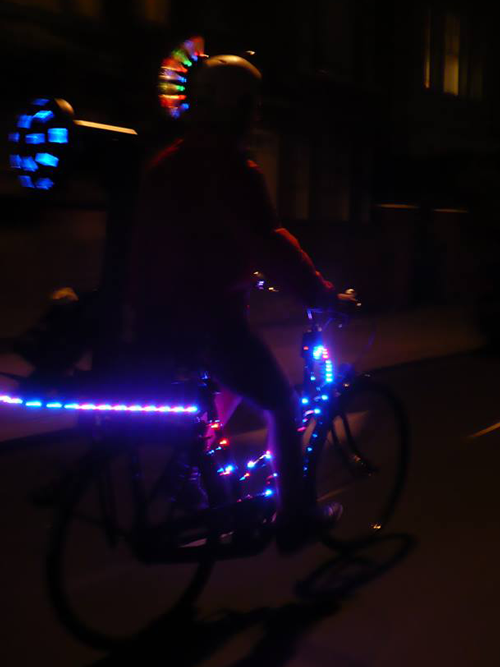