At Cyclehoop, we get to meet and work with a huge number of awesome and interesting people. When we received an order for one of our Outdoor Bike Pumps from independent cycle shop owner Winston Farquharson, and got to know his story, we knew we had to share it with all of you.

The story of how Winston came to set up his shop, despite the many obstacles he faced, is not uncommon amongst independent bike shop owners, who more than ever are facing rent hikes and other financial difficulties that make it very hard to stay in operation.

At Cyclehoop, we already know independent bike shops are more than just a place to pick up a bottle cage or spare inner tube; SE20 Cycles, like so many bike shops, is a buzzing hub of the community, where advice and support is doled out in generous measures.

Winston, or Winnie as he is affectionately known, is a father, husband an entrepreneur, and a community champion! His bike shop, SE20 Cycles, is a longstanding feature on Penge high street, but how it got to be there in the first place is a testament to the hard work that bicycle shop owners have to put in. 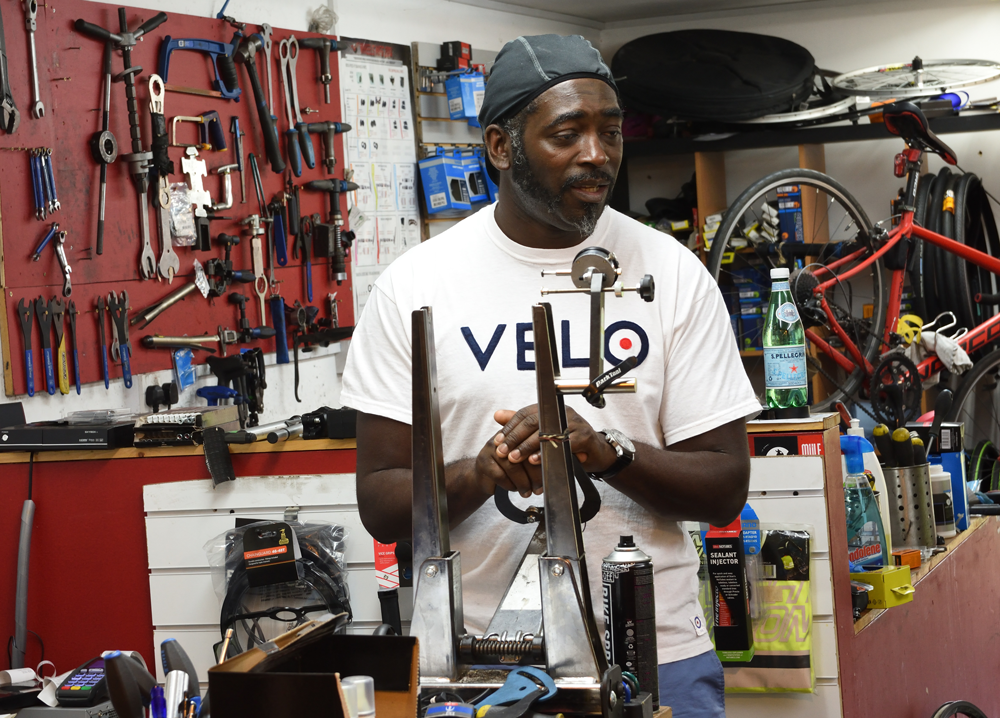 “I work until 2am sometimes, and when you own your own business, it can be tricky to keep work and family life in balance. But I love owning my own business and working with bikes”

Originally working in the City as a trainee lawyer, Winnie retrained and worked as a sports therapist for years. However, an injury to his foot meant he became registered disabled forcing him to give up the job he loved. After months of rehabilitation he decided on a change of career and pursued retraining as a bike mechanic to open his own bike shop.

“I have people from all walks of life come through my shop door! Which is, of course, brilliant!” 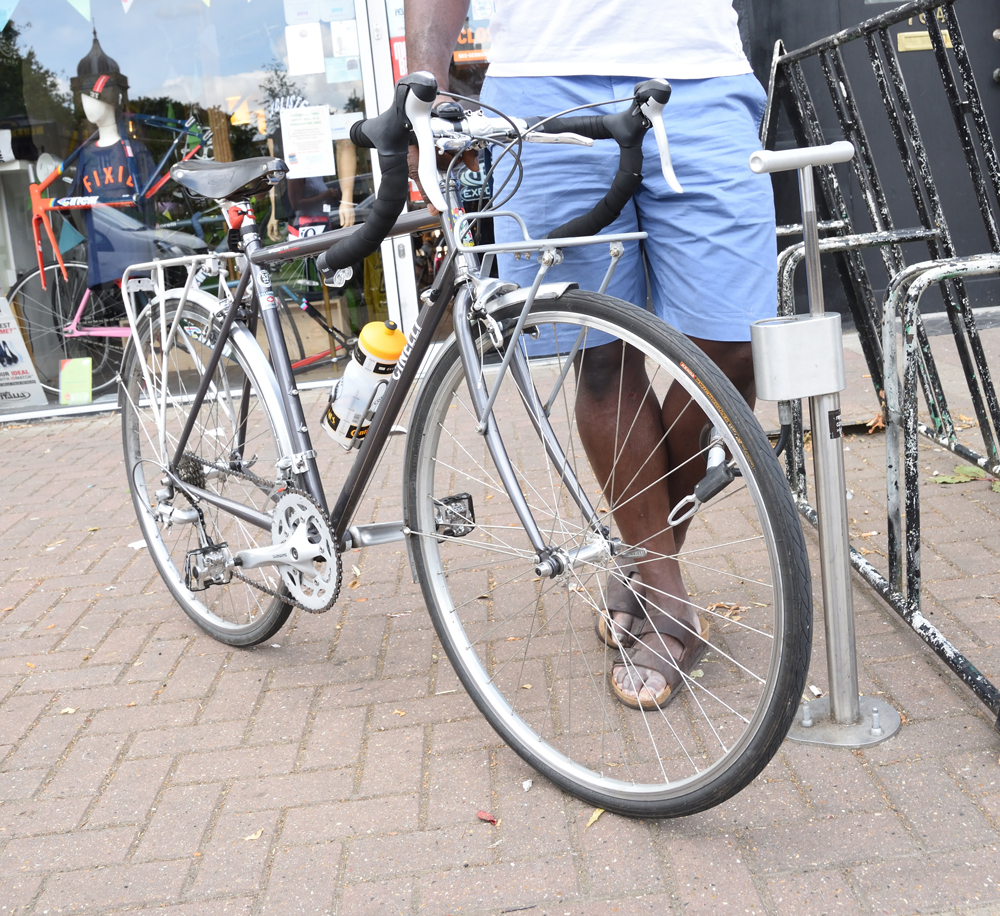 However, the challenges of setting up a business were keenly felt by Winnie. He explains, “It was something I was determined to do, so I just got on with it! But it was 2008 and the start of the recession; a very difficult time. My bank pulled out of the loan they had agree to lend me the day before the shop was due to open. I walked out of the meeting at the bank virtually crying and thinking ‘what you have done’”. With sheer determination and some support from friends, Winnie overcame these obstacles and opened the shop anyway with literally nothing in it.

Eight years later, he is still servicing the bicycles of South London and he is a well-known positive influence in Penge. His involvement in kick-starting bicycle kids clubs for local schools and providing bicycle polo sessions for local youths, is well known and has been appreciated in the area over the years.

Winnie has also been running weekly ‘Shop Rides’ for years, where he has built a community of people who meet up, come rain or shine, to enjoy a ride together. These rides are attended by around 25 people a week and take in routes anywhere from 15 – 40 miles long. He is also very active with Penge Cycle Club which has about 200+ members.

He is always on hand to help others in the community to get them involved in cycling. Recently, he’s been supporting a slightly under-confident rider by taking them out for 1-2-1 ride sessions to help build up confidence and speed so they can keep up with the pace of the cycling club. It’s this commitment to helping others that sets Winnie aside from other so it was no surprise that he wanted to get a more robust bike pump for the general public to use when they found themselves low on air.

“I generally spend an average of £500 a year on pumps. I allow people to take them out to the front of the shop to use them but they keep breaking! Although they are fine for general individual use, when they are used so many times a day, everyday, they just can’t withstand that amount of usage. It’s usually the hose that goes first. So I decided I needed a more durable, heavy duty pump that I could buy once and could withstand a high volume of daily usage. So I got a pump from Cyclehoop as I like the way they looked and they looked like a good quality product. It’s been outside for about three months now and gets used about 30-40 times a day on average. Everyone locally uses it! On Saturday’s it’s a massive resource for adults and kids alike”.

“I would say the best thing about it is that it is much more robust verses your average pump; the seal inside is much stronger than other delicate pumps. I’ve had a lot of praise and thanks for providing the pump and more people notice that the bike shop is here now as a result of people finding out there is a public bike pump here, 24/7. People often ask me how much it costs to use it, and it’s great to say ‘it’s free, help yourself’”. 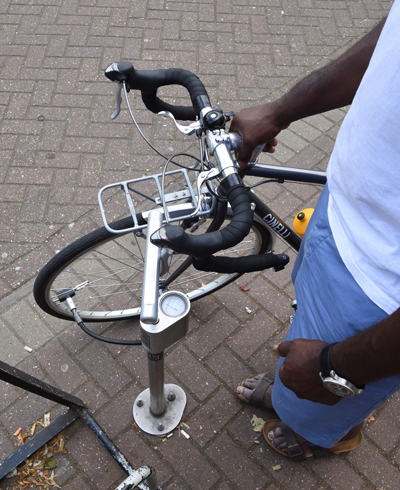 What does the future hold for SE20 Cycles?

“There is no long term plan apart from staying alive. Business is tough, and a lot of companies have closed this year so I can’t assume I will be in business this time next year. Rents are increasing and just to break even, it is very tough…making a living is very tough”.

Winnie has plans to rearrange the internal layout of the shop and develop the outdoor space at the back of the shop. The plans are incredibly exciting and as you would expect from a man who invests so much of himself in his community, he wants his developments to benefit local school kids as much as possible. Watch this space!

Winnie has already been recognised for his longstanding positive contribution to the community, by being invited to have lunch with HRH Queen Elisabeth. He sat at her table after she personally requested he join her after hearing about his work in the community, during her local celebrations of the jubilee.

Cyclehoop can’t top lunch with the Queen, but we felt it important to draw special attention to a man whose ethos is so closely aligned with ours. Cyclehoop is passionate about breaking down the barriers holding people back from cycling; just like Winston Farquharson. So if you are ever in the SE20 area, pop down to his shop to use his free public bike pump and shake him by the hand!

Find out more about our selection of Public Bike Pumps that now come with an improved design and extended two-year guarantee.