Friday 12th September saw the Brixton Cycling Fair take place in Windrush Square, an event organised by the London Cycling Campaign bringing together the biggest names in cycling. With all of this going on already, it seemed appropriate for Cyclehoop to add to the excitement with their own celebratory launch of the 100th Bikehangar for the Borough. 100 Bikehangars are officially installed on the streets of Lambeth, meaning that 600 cyclists currently benefit from safe, secure cycle parking on their streets.

Lambeth Council are keen to become the most cycle friendly borough, therefore reaching this joint milestone is something to be incredibly proud of. The day also marked the three year anniversary of the very first installation in Bonnington Square. 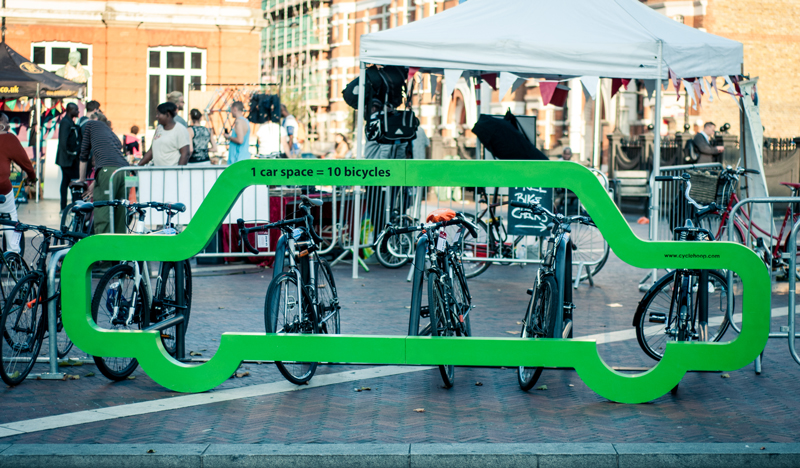 A special design was commissioned to mark the 100thhangar. Cyclehoop incorporated the colours of the Jamaican flag to tie in with the theme of the area. The home of the hangar on Saltoun Road is a stone’s throw from Windrush Square. (During the 1940s and 50s, an influx of immigrants arrived from Jamaica on the Empire Windrush ship, today the area remains heavily influenced by the Jamaican culture.)

Cllr Nigel Haselden, Cabinet Member for Regeneration Transport, and Strategic Planning for Lambeth said“I was very pleased 3 years ago to launch the first Bikehangar for Lambeth in Bonnington Square, today we are celebrating the 100th. They are quite remarkable, for a small charge you secure your access to this very well designed Bikehangar space. I think there’s a great future for this type of cycle parking and I am personally very ambitious for this type to be more prominent on our estates in large numbers.” 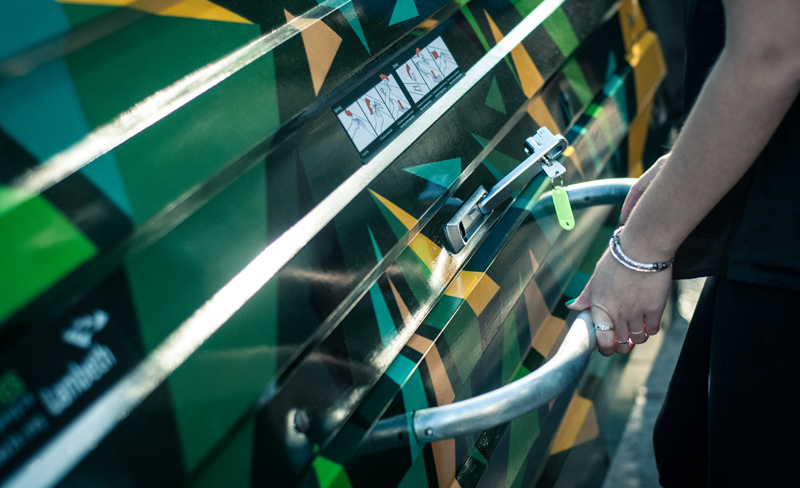 Residents eagerly awaiting their key for their space were invited down to meet the team, ask any questions and more importantly enjoy ‘bikehangar’ cake and ginger beer.  One happy user said “ Before the bikehangar I parked my bike in a very tight hallway in my house which was a nightmare so I’m much happier now. The bikehangar scheme allows me to have a space to park my bike safely, near my house making cycling and urban commuting much easier.”

If you would like more information on the Bikehangar scheme, contact the Cyclehoop rentals team at rentals@cyclehoop.com